The Greenpoint Library & Environmental Education Center of the Brooklyn Public Library opened its doors with a virtual ceremony on Tuesday, October 20, 2020!

NBN’s Community Engagement Fellow Edric Huang sat down to learn more about the library with Ames O’Neill, BPL office of strategic planning project manager, who oversaw much of the Greenpoint branch’s revitalization and construction.

Learn more about the branch on its website! If you are interested in becoming a Friend of Greenpoint Library, ask a staff member for details or email friends@bklynlibrary.org for more information.

Watch a clip or read the full interview below.

The interview has been edited and condensed for clarity.

EH: Congratulations again on the opening! We’re so excited to see the library back! For anyone who may not be familiar, can you tell us about the history of the Greenpoint Library?

AO: It goes back to the beginning of the 1900s, when Carnegie Library was built on the corner of Leonard and Norman. In the early 1970s, the building had fallen into disrepair, and the city decided that, instead of fixing it, it’d be easier to tear it down and build a new one in its place. The new library that they opened in 1973 was a one-story building, about 7500 sq. ft., bunker-style, brick walled, pretty low to the ground, with a fence — overall, not the most welcoming. It was still very well-used by the community; we had amazing patrons who visited us every day. But we had been wanting for a while to expand the library, instead of crowding everyone into that space.

We finally got that opportunity when GCEF put out a call for grants. A couple members of the community approached us and said, “Oh have you heard about this? It’d be a great idea if the library applied to expand and make it really environmentally friendly.” So we put a plan together, applied, got the most votes from the community, and received the biggest GCEF grant.

The grant period began in 2015 that was when we kicked off the project officially. In March 2015, we put together a community advisory board, including the predecessors of NBN (NAG and GWAPP), other local groups, and representatives from elected officials, to be our advisors in what the community wanted from the library. We also reached out to larger groups of people, and had displays in the old library to show what we were thinking of and ask for people’s opinions. This influenced the design, and that’s how we ended up with the library we have now!

We tore down the old one in Fall 2017. When we started excavating after that, we ran into issues with the stuff that had been left behind from the Carnegie Library, including the foundation, the whole basement, and old heating pipes that were all wrapped in asbestos. We kept running into that asbestos problem, shutting everything down to remediate, then starting back up, only to find more and shut down again. It was a long process of stopping and starting. But finally by the end of 2018, we finally finished our new foundation and basement, and put in the steel beams for the frame. We were getting ready to open in the spring of 2020, when the pandemic happened. And as of last week, we’ve finally opened after a 3 year process. It’s exciting that we’re finally opening, but sad that we can only be open for so much.

EH: Why is it so important for the Greenpoint Library to house an Environmental Education Center?

AO: The idea came from the community, that when we expand the library, we do a combination library and environmental education center, because of the history of the long, long-time pollution in Greenpoint and the resulting environmental activism that has been a part of the fabric of the community for decades. We’re teaching people about that, but also giving them the opportunity to have the space to hold their own meetings and events. We also have a building that doubles as a teaching tool, so for anybody who’s not setting out to learn about the environment when they visit the library, there are features that we call out with signage that tells you about different aspects of the building, such as how we’re capturing rainwater and how our solar panel works. We hope the building will serve the community in a lot of ways in continuing their  environmental education.

EH: They are so many exciting environmentally-friendly design features that reflect a variety of educational opportunities, as you mentioned. Do you have any favorite design features or areas of the library?

AO: My favorites are probably the green roofs. On the second floor, we have the reading garden, which (one day) will be open for people to sit outside, read a book, enjoy nature, and host events. The way the plants have grown into the space makes it really beautiful. It feels isolated from the city. The third floor also has a roof garden that is only open for events and programs. It’s really nice; it’s this unexpected, big, open green roof that you can walk onto and see amazing views, the open sky, and our solar panels. You can get a very different perspective of the building and the neighborhood.

Right now, only the ground floor plaza is fully open and available, and people are using that all the time. As soon as it was finished this summer, people started sitting out on the benches, which we love! We’re happy that it’s open; in the old building, the area was fenced off and you could only access the plaza when the library was open.

EH: Can you talk about the Greenpoint Environmental History Project? Are there plans to build upon it within the new library?

AO: The Greenpoint Environmental History Project was another project that we won a GCEF grant for. It builds on something the Brooklyn Public Library has already been doing: collecting oral histories, recording conversations with residents, and making them available digitally on our website. We hired a part-time employee for the duration of the project to go out, talk to people, and put out a call about stories for the neighborhood’s environmental history and activism. We also had community scanning days or events, where people could bring their things, get them scanned, and put them on the website once Acacia [Thompson] catalogued them. Hopefully we can get another opportunity to keep building upon the project!

EH: I love libraries because despite everything happening in our country, libraries remain a truly democratic institution that is for everyone. How might the library bolster ongoing advocacy and activism in the community?

AO: As a provider of up-to-date and trusted information and a supporter of civic engagement, the library is unique. Every neighborhood library in the Brooklyn Public Library system responds to the needs of their patrons in different ways. In Greenpoint, we are eager to support the neighborhood’s strong environmental activism. That need was voiced early on and became a part of the whole building design. We also hope to support a lot of different programming, not only ones that we put on ourselves, but programs from partners like North Brooklyn Neighbors, Newtown Creek Alliance, or others who put on free events and meetings that teach people about conservation, climate change, or how to get involved.

We also have a program called the Green Series, sponsored by Whole Foods, which are virtual now but previously in-person. When things were normal, we were doing one children’s event and one adult event per month. We’ve had a lot of great author events in that series, and we hope to continue them.

EH: We know that you all are hiring an Environmental Justice Coordinator, which we are super excited about. Can you talk more about the job and your hopes for this position?

AO: That was our Chief Librarian’s idea! We wanted to create a job that is both apart from the normal positions in the library, while still integrated into the library system.

We hope the EJ Coordinator will be someone who helps us engage the community around environmental education and activism, and continues the work that we’ve done with our remediation records, which we host publicly for anyone to access. This person will also manage the upper roof garden, where we have raised beds for plants that we hope local schools and other groups will be able to work on. It will be a unique position that we’re really excited about!

EH: Amidst the COVID-19 pandemic, how can patrons interact with the library for now? What kind of digital resources can they take advantage of in the meantime?

Right now, all of our branches are only open for grab-and-go lobby service. You need to put books or DVDs on hold first. We’ll contact you when they’re ready, and then you can come check them out in a little area right in front of the front doors of our branch. You can also return anything whenever the library is open. That’s it for now. We’re making plans for future services that will be limited; it’s hard to commit to a timeline right now, but we’re looking forward to allowing a small number of people into the library to browse. In the meantime, people can use the book lists we feature on the website or call our librarians to get recommendations.

We’re investing heavily, even more than we were before, into e-book and digital audio books that people can use at any time. We have a lot of online databases people can use for free with a library card, like ancestry.com or BrainFuse, and a lot of virtual programming that is free, everyday, and on different platforms like Facebook, Instagram, and Zoom. We’re doing StoryTime for kids, knitting groups for adults, book talks — we started doing all of that immediately upon the shutdown, so it’s been really great to see the Brooklyn Public Library leap right in. 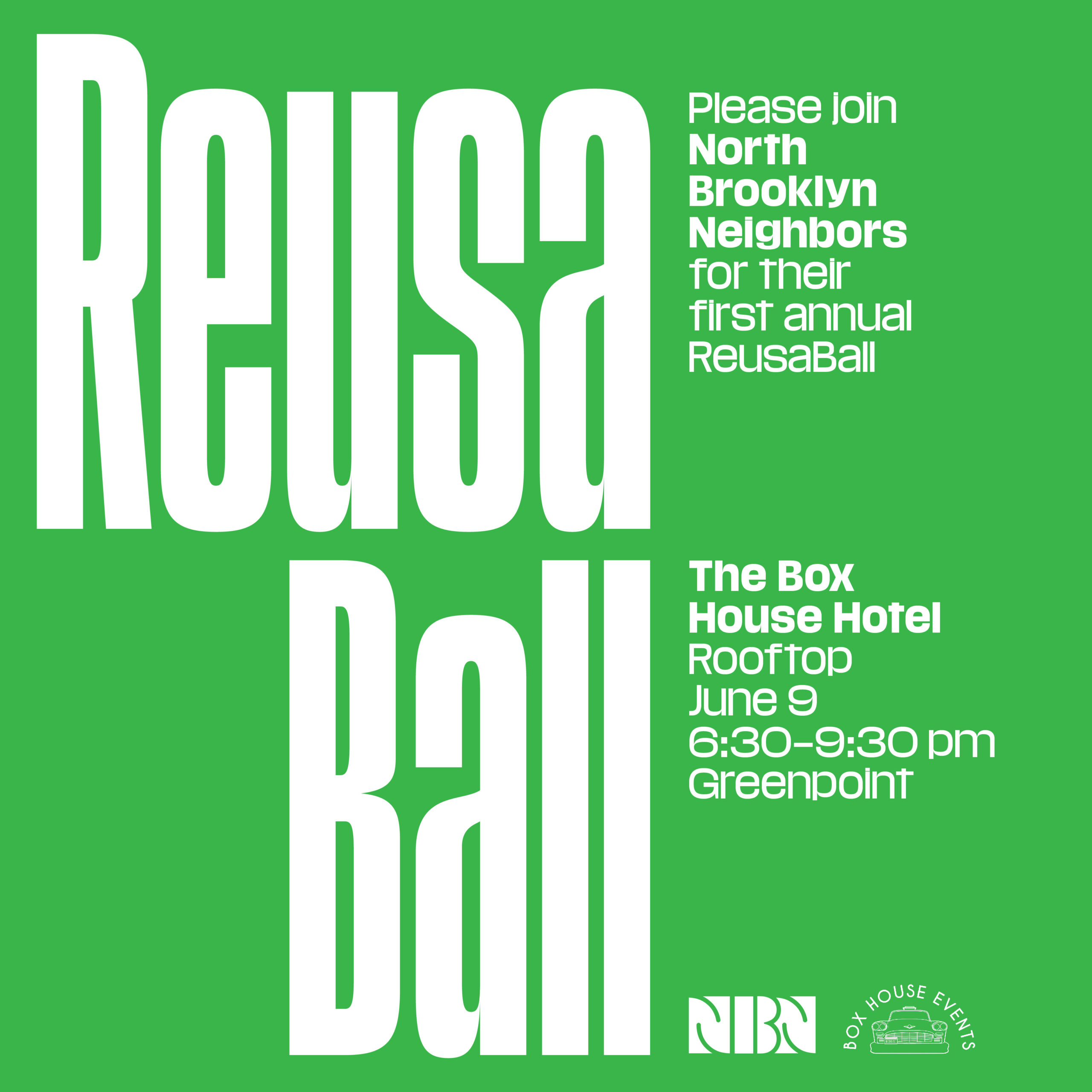 Please join North Brooklyn Neighbors for our first annual ReusaBall! We will be highlighting zero waste practices throughout the evening while celebrating our 28th year…